Groundswell at Auburn Seminary is using the ControlShift platform to advance immigration reform by fusing time-tested, on-the ground tactics with cutting-edge digital campaigning. At the heart of their campaign is the concept of “sanctuary,” or the physical sheltering, by faith communities, of immigrants facing deportation. Sanctuary is an old idea – activists sheltered escaped slaves on the Underground Railroad and protected Jews during World War II. What’s new is that the current movement to reform US immigration policy uses the internet as a powerful tool for amplifying the message and engaging a broader swath of people to take action.

Take for example the case of Daniel Ruiz, in Tucson. Although he had been in the US for 14 years, paid taxes, supported a wife and son, had no criminal history, and was active in the community, in 2011 he was pulled over by the police for a minor traffic violation. The Border Patrol was called in, and he was given 30 days to leave the country. On the day before his deportation deadline, he walked into the Southside Presbyterian Church surrounded by clergy – the beginning of a sanctuary campaign to stop his deportation.

Although Daniel lived in the protection of the church, this wasn’t a fugitive action to hide him from the authorities. Quite the opposite — it was a launching point for a public campaign to highlight the disastrous effects of deportations on immigrants, families, and communities, and to use congregations’ civil disobedience to call for larger reform. 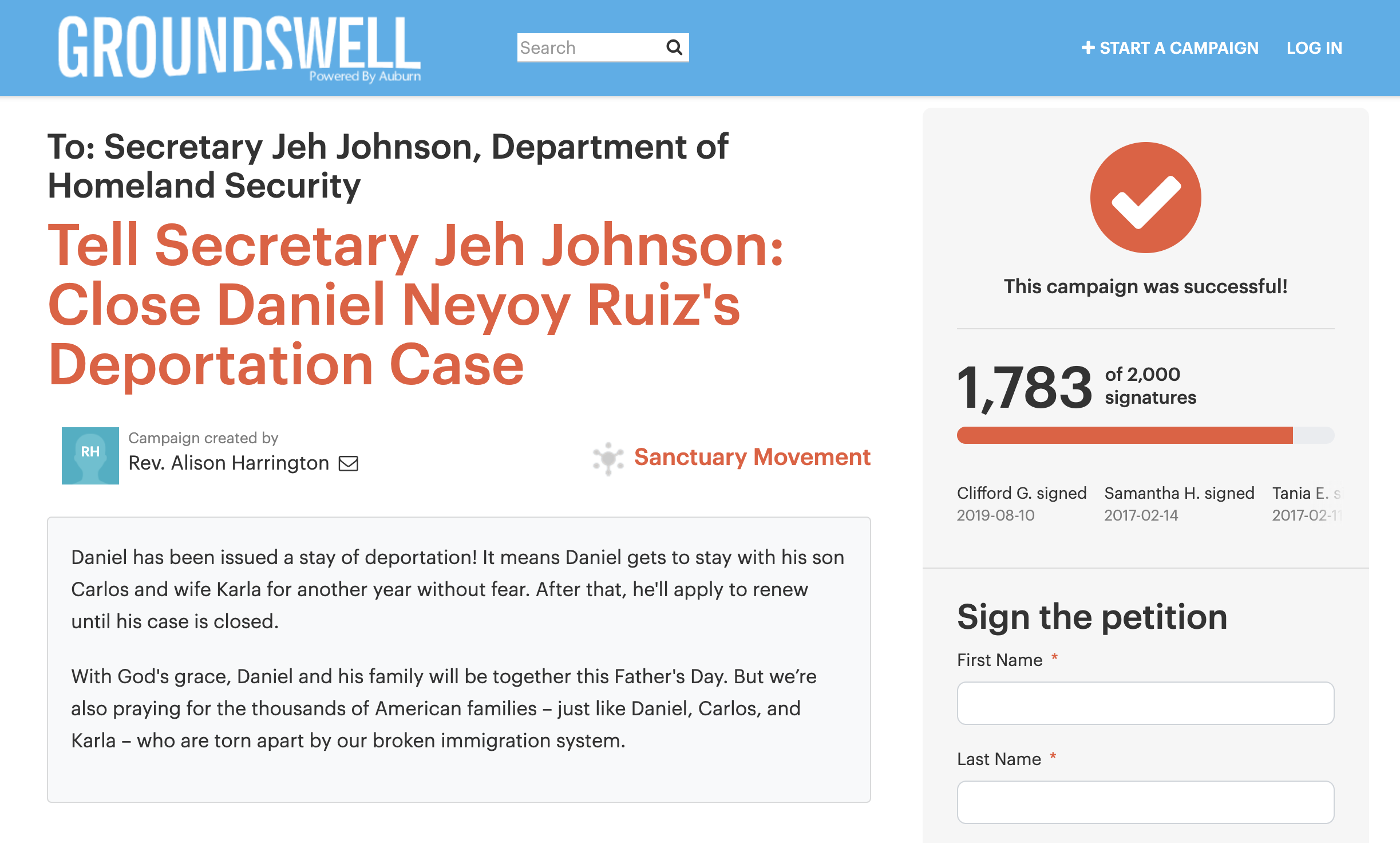 The campaign that helped to prevent Daniel's deportation

Southside’s Reverend Alison Harrington used Groundswell’s ControlShift site to launch an online petition calling on ICE to halt Daniel’s deportation. Over 1,700 people signed the petition, not only showing their support for Daniel, but also bringing them into contact with Rev. Harrington and Groundswell, who were able to send them campaign updates and let them know what else they could do to help.

After about a month, they won. Daniel was issued a stay of deportation and remains in the US with his family.

Inspired by the courage and success of Daniel and Southside, other congregations launched sanctuary campaigns, using Groundswell’s ControlShift tools to increase their impact. The movement continues — as recently as February 2016, an Austin, TX congregation launched a campaign to stop the deportation of Hilda Ramirez. Groundswell has taken advantage of a ControlShift feature called Efforts, which allows them to group all of the individual sanctuary campaigns together, offering suggested content and guidance while giving the individual campaign starters to message their own petition signers. As an organization supporting the campaigns, Groundswell has also built a powerful following of activists who initially supported a local issue, but can now take action on other campaigns, such as speaking out against anti-Muslim hate and demanding an end to the Obama administration’s raids on Central American refugees.

ControlShift is proud to offer a platform that supports organizations like Groundswell and campaigns like the sanctuary movement. It’s what we’re designed to do: provide easy-to-use tools that allow an organization’s members to launch and run campaigns, bringing together best-in-class online tactics with powerful offline organizing to win real improvements in people’s lives.

Read more about the sanctuary movement and Groundswell’s role in it.