Coworker.org uses the ControlShift toolset to empower employees to fight for change in their workplaces. A month and a half ago, Kristie Williams, a barista at Starbucks, created a campaign asking Starbucks to change its dress code to allow visible tattoos. Since launching, the campaign has received more than 25,000 signatures — including 14,000 from Starbucks baristas — that represents 5 percent of the Starbucks global workforce.

In October 2014, Starbucks announced that it will allow baristas to have visible tattoos. Campaign creator Kristie Williams said, “I am jumping up and down and am so excited that we can now be more comfortable at work! I’m thrilled that Starbucks listened to feedback from employees like me and has updated its policy. I’m also so thankful to the thousands of baristas and supporters who joined my campaign and shared their stories about why this is important. I never thought my petition on Coworker.org would be signed by so many baristas around the world and it’s great that when we come together, we can make our company better. I’m ecstatic and going out to buy a short sleeve shirt for work right now!” 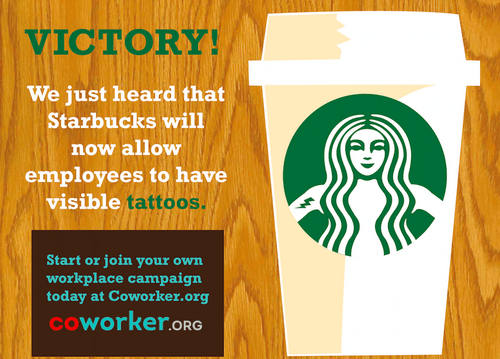