Groups like 350.org have their work cut out for them. There are few fights as challenging as confronting climate change. World leaders and governments have been slow to get on board or even acknowledge that a problem exists, and fossil fuel interests are deeply entrenched in the world economy. Any real change will involve countless policy, regulatory, business, and individual actions.

In 2013, 350 launched a new divestment campaign, calling for institutions to purge fossil fuel stocks from their portfolios. They knew that the fossil fuel industry was propped up by the financial industry, which in turn was made up of millions of investors. While it would probably be difficult to apply pressure through individuals, a significant amount of money is held in institutional portfolios by colleges, universities, churches, local governments, and pension funds. Get enough of those to drop fossil fuels and the industry would feel enough economic pain to motivate it to clean up its act. Divestment as a tactic had also worked before—most notably in pressuring South Africa to end its system of apartheid.

This type of campaign does not lend itself to a top-down approach. It would require tens of millions of dollars and a huge staff to research the potential targets, figure out pressure points, write emails, and organize actions targeting thousands of decision makers around the world. But 350 knew it had a far more valuable resource—passionate members in nearly every corner of the globe—and deep experience using the internet as a powerful connector for communities and activists.

They set up a site — campaigns.gofossilfree.org — using the ControlShift platform, where members could easily launch online petitions and recruit supporters for campaigns asking their universities, religious bodies, municipalities, and other institutions to clean up their investment portfolios. 350’s founder, Bill McKibben, first put out the call for students to start campaigns on a 2013 tour of college campuses. His appeal clearly hit home—since then, over 1000 campaigns have been launched around the world. 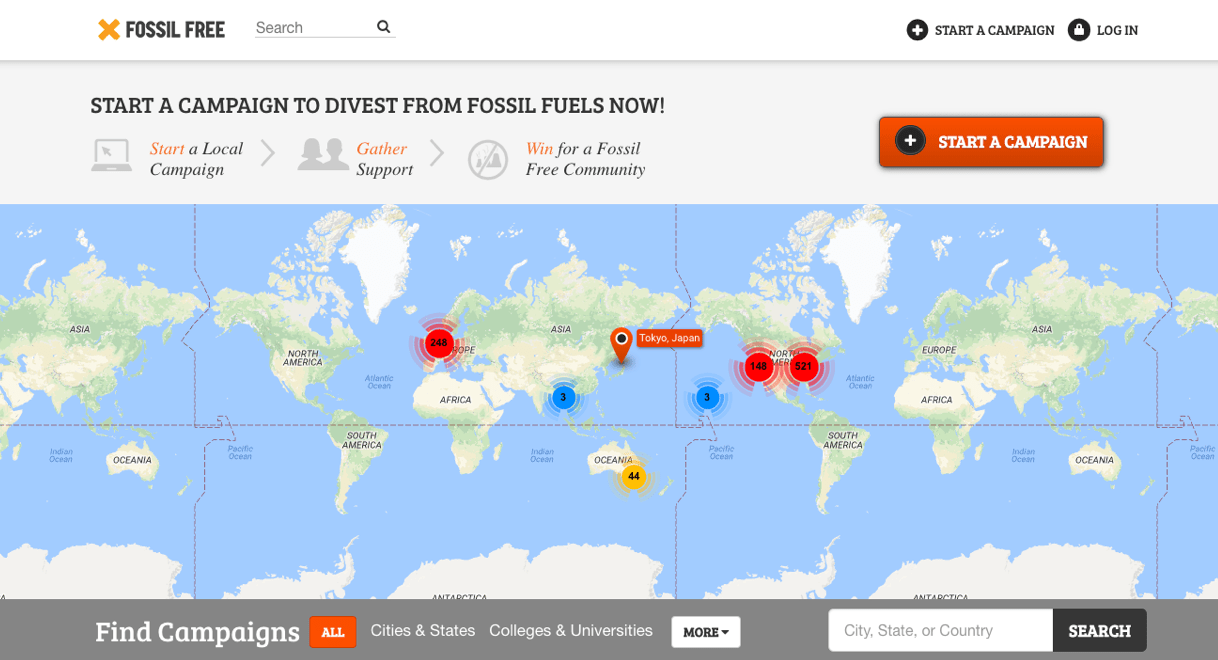 The online petitions were only a starting point. 350 knew that the pressure would build only if real people showed up in the streets and in the board rooms, taking their demands directly those with the power to make investment decisions. At the beginning of the divestment movement, 350’s staff were able to offer very hands-on support for new campaigns, reaching out to new petition creators individually with helpful tips for stronger petitions and how to write better emails, or connecting them with other groups to work with or with a staff organizer for more support. It was a high-touch training ground of sorts for member campaigners.

As the movement has grown, there are simply too many campaigns for their staff to keep up with in a highly personalized way. (This, of course, is not a bad problem to have.) To deal with that, they’ve adjusted their intake process for new campaigns to be lower touch — just making minor edits and doing basic moderation. The team still focuses on focused support for a small number of priority campaigns, but otherwise has worked to develop more scalable resources like a new campus divestment guide and web workshops to help new campaigns along.

Three years later, the campaign is still going strong. Success has come in the form of actual divestment victories in places like the University of Glasgow (petition), Warwick University (petition), and hundreds of other institutions with a total of $3.4 trillion in investments. But it has also helped build a movement beyond what 350 could have expected. Groups like the Fossil Fuel Divestment Student Network have spun off, as have individual campus and community groups that started by working on divestment and have since taken on other climate campaigns. While some organizations might fret at losing their members or control of their message, 350 sees it as a net positive—the more, the more powerful, in a global movement to that needs to be fighting on every front to turn the tide of climate change.