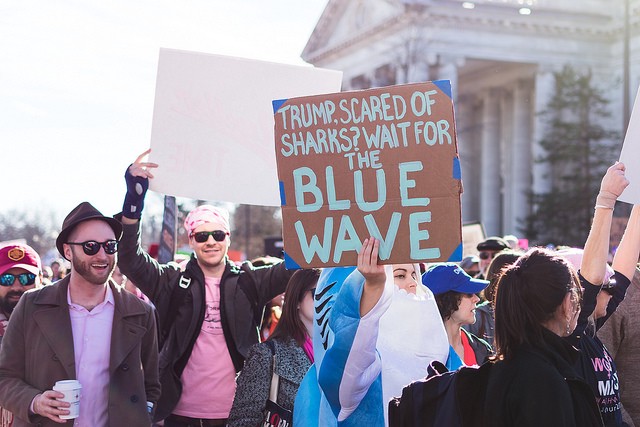 Photo Credit, Kelly Bell, cc-attributionThe political tech ecosystem in the United States usually follows a predictable cadence. Every four years, Presidential campaigns make huge investments in organizing, outreach and data to win. They act as a pressure cooker that brings together brilliant and passionate staff from around the country. Each cycle spawns a new generation of companies and consultancies that seek to replicate, commercialize and sustain the innovations that campaign staff hacked together during the campaign.

In contrast mid-term elections are usually relatively quiet on the campaign tech innovation front, but 2018 is fundamentally different:

The Tuesday Company
Recruit your supporters to reach out to their friends on social media. Allows a campaign to treat their most engaged volunteers as digital canvassers of a sort, spreading very specific targeted messages via their social networks. Started by Hillary campaign alums.

MobilizeAmerica**
**A self-described “B2B2C two sided marketplace for volunteering”, MobilizeAmerica seems to be having the most success syndicating phone-bank and canvasses setup in VAN by campaign staff to grassroots organizations like SwingLeft and MoveOn. Since 501c4s can not coordinate directly with candidates, the syndicated event directory they provide allows outside organizations to tell their audiences about candidate volunteer opportunities without breaking laws around coordination. They also have a mobile app for taking local action.

CallTime.ai**
**Better call time fundraising through a streamlined calling user interface and predictive models that help candidates find the most promising leads for donations among their prospects. From the outside, it seems like they’ll compete with RevUp. Using FEC donor data (as both companies do) as the primary sources of predictive prospect scores seems legally ambiguous at best but it’s a great idea if they can make it work.

SameSide**
**Airbnb experiences, but for activism. Essentially, SameSide runs a platform where event promoters can post “fun” activities with an activism twist. Members of the public can pay to attend these events, for eg a “boozy activist brunch for immigration reform” and the promoter might include a call to action as part of the event they’ve produced. Revenues are paid out to the event promoter (not an advocacy org associated with the cause) and the website platform charges a processing fee. I’m personally somewhat skeptical of the commercial nature of this venture — but it’s a truly different and innovative new model for getting engagement to scale and reaching a potentially new audience which got my attention.

GrowProgress and Swayable
Both of these startups have different strategies for testing messages to figure out what will move persuadable voters to your side. GrowProgress is modeling the personality traits of voters while Swayable is measuring the change in opinion caused by an advertisement. I’d love to better understand their methodologies and what makes their approach unique.

The Movement Cooperative
**I’m so excited about this one after hearing more about it from the founder Josh Nussbaum a few weeks ago. By working collectively and using their joint buying power, a growing coalition of progressive organizations are accessing a shared data warehouse and analytics platform, national voter/consumer files, and the technical support to make it all work seamlessly with their existing infrastructure. Starting with the voterfile is smart, and it will be interesting to see how the shared tech model might scale to other use cases beyond that initial need. OPEN, a global coalition of multi-issue advocacy organizations sharing tech and organizing strategy resources, provides an interesting model to potentially replicate in the American context.

Hustle, Spoke and Relay **The 2016 campaign was a breakout moment for peer-to-peer texting. I’m worried about the long term viability of p2p texting as a tactic and the ways it’s being used by some organizations this year have trended towards the cringeworthy but it’s still the best way to get your opted-in supporters to an event near them or otherwise have scaled text message conversations with your audience. Hustle has attracted a bunch of capital. Relay has passionate fans. An impressive open-source community has grown around Spoke. I think the next round of innovation will be integrating this tactic effectively into other tools like VAN, event management or fundraising as the basics become more of a commodity.

There is a much bigger universe of these startups than I’ve been able to highlight here. Micah Sifry, Matt Stempeck and Erin Simpson have compiled the canonical list in an enormous spreadsheet. These just happen to be ten of the ones I’ve been thinking about over the last couple of weeks.

ControlShift is also focused on building infrastructure to help make the mid-terms a nightmare for Trump. We’re spending the summer investing in the events and local groups features of our distributed organizing platform — which we expect to be useful for a variety of organizing campaigns this summer and fall.